What is an Earthquake?

Earthquakes are common occurrences due to plate tectonics; the slow movement of rock landmasses that are constantly grinding against one another, creating stress. Eventually, the stress builds up at points of rock weakness and result in a sudden release of stored energy, which create seismic waves and results in an earthquake.

We live in a seismically active region that is often forgotten and overlooked due to the lack of frequency and destruction our region has experienced. The Pacific Coast is known for its earthquakes and is considered the most seismically active region in North America. Though, we experience frequent earthquakes, most cannot be felt due to their magnitude and depth of occurrence and go unnoticed. The Pacific Northwest is compressed by geological forces that are unpredictable, and formed from it’s very active, and occasionally violent, natural environment.

The Ring of Fire

The Ring of Fire is a 25,000 mile long chain of volcanoes and earthquakes around the perimeter of the Pacific ocean coastlines. The Ring of Fire encapsulates several tectonic plates that are constantly moving inches per year due to the heating and cooling of these plates. Where these plates meet results in a collision zone of volcanic eruptions, earthquakes and oceanic trenches. These plates regularly skid past, colliding into, and move above or below each other, resulting in fault lines. 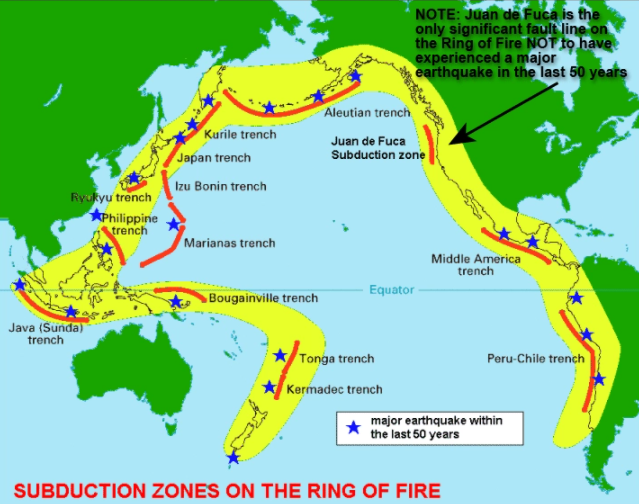 Earthquakes in the Pacific Northwest

In the Pacific Northwest, the Juan De Fuca plate is one of the smallest tectonic plates but plays a major role in developing our coastlines and geography. The Juan De Fuca plate is diving under the western side of the North American plate at the Cascadia subduction zone, a fault line 50 miles west of the Washington-Oregon coastline creating hundreds of small earthquakes each year, most of which cannot be felt.

In a 2015 article, entitled The Really Big One, Katheryn Shultz of the New Yorker, discusses the Cascadia subduction zone, which runs over 600 miles north to south, from northern Vancouver Island to Cape Mendocino in northern California. Her article has made many in our region aware of the extent to which we are in a seismically active zone, and led to a significant increase in the demand for seismic retrofit work. As previously mentioned, the Plate of Juan De Fuca is constantly subducting beneath the North American plate. In our region, deep slab earthquakes occur several miles below the Puget Sound, within the Plate of Juan De Fuca. As the subduction plate bends to dive more steeply beneath the Puget Sound, the upper part stretches and fractures in normal faults. Because the hypocenter of these types of earthquakes is so deep, typically miles below the surface, the forces of these earthquakes are dissipated and spread out across a wide area.

These types of earthquakes are the most frequent in our region and typically occur every 30-50 years.

The constant load and release of energy from subduction zone earthquakes, occurring every 300-600 years for the last 16 million years, has created a permanent deformation of the North American plate. There are several fractures within the North American plate, just below the surface of the Puget Sound and cities and towns, to include South Whidbey and Tacoma. Seattle has the misfortune of sitting directly on top of one such fracture.

The 43-mile Seattle fault runs west from the Hood Canal through the Puget Sound and south Seattle, parallel Get a professional evaluation